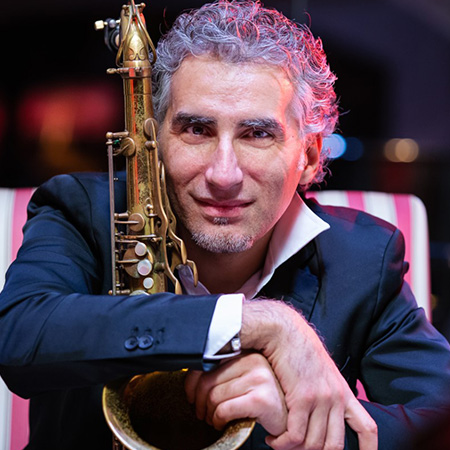 Felice Clemente - saxophonist, clarinettist, composer, conductor, band-leader and teacher - has been defined by Enzo Siciliano (from the Italian newspaper Repubblica) "the best young Italian saxophonist" and by Cadence Magazine (USA) "a talent that is destined to make the history of jazz".

Born in Milan in 1974, he started developing his passion for music within his family, under the guidance of his grandfather, a clarinet maestro.

Mentioned several times and ranked by the Italian magazines Musica Jazz and Jazzit among the best saxophonists ever, he is actively involved in various projects for the dissemination of jazz culture. He features a remarkable record production, with 15 records as leader and co-leader, and 16 as sideman. His albums "Nuvole di Carta" and "6:35 AM" have received 4 stars from the renowned American magazine DOWNBEAT (November 2011 and June 2015).

He has performed 33 times at the Blue Note Milano, one of the most important jazz clubs in the world.

Felice Clemente is also very invested in his work as an educator. He currently teaches at the CPM Institute (Centro Professione Musica- Centre for the Music Profession) in Milan, and he is the proud teacher and director of the Orchestra Stabile of the Middle School Fermi, in Villasanta, just outside Milan, a permanent 44 piece young orchestra.
He is also the artistic director and director of the Mixiland Jazz band in Milan, as well as of OJBM (Orchestra Jazz della provincia di Monza e Brianza - Jazz Orchestra of the province of Monza and Brianza) and a member of the Board of Directors of the national association "Il Jazz va a Scuola”(Jazz goes to School), started by the Italian National Jazz Federation chaired by Paolo Fresu.

Argentine Guitarist, composer and arranger , he is musically formed at the Universidad Nacional de Córdoba (Argentina). He has studied guitar with master Rodolfo Candi and after that he improved with master Isabel Siewers and Oscar Ghiglia; in antique music with Oscar Ohlsen, in composition with Francisco Kröpfl, Ivo Malec, Pierre Boulez and in cinema music with Ennio Morricone. As a compositor he permanently works with several groups and chamber orchestra such as cinema and theater director. Nuova Fonit Cetra-RAI has published his music chamber in CD Atmospheres and editorial Sonzogno has published his orchesta compositions. During six consecutives years Disma Music and Scuola Musicafestival has commissioned several compositions for a youthful orchestra of 1400 musicians (Scuola Musicafestival di Rimini/Roma). He has composed the music for sound bands of several RAI documental series (GEO program). For the singer Lucia Minetti he has composed the music of the song Luz! which is from the homonymous CD, edited in 2005. He has accomplished all the arrengements of tango by the Orchestra d'archi italiana directed by Mario Brunello, in this occasion he has participated as a soloist player. In the year 2007, together with the saxophonist Felice Clemente he has published Escaleras CD, it has received the best critics from the public and specialist press. 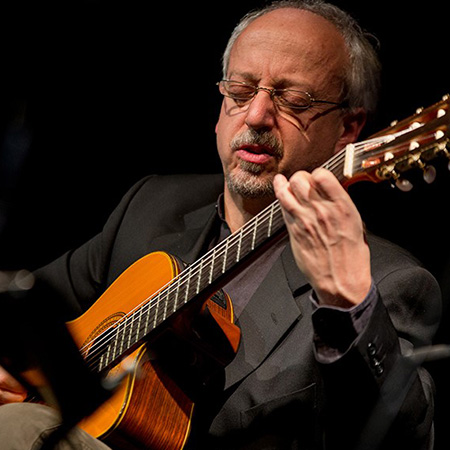 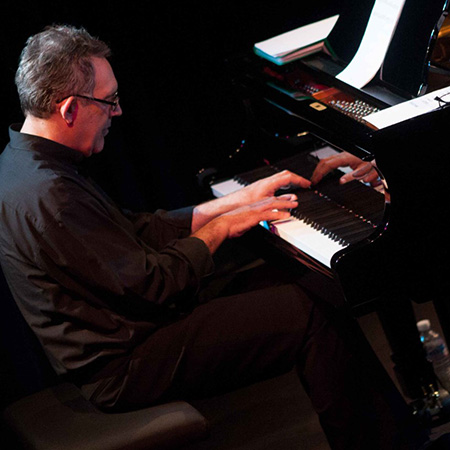 Massimo Colombo, born in 1961in Milano, is a composer, arranger, pianist and keyboard player who got a diploma in piano at "conservatorio G. Verdi" of Milano under Alberto Colombo's guidance. He has studied harmony, contrappunto and composition with Davide Anzaghi and Angelo Corradini. Because of his interest in jazz he took some lessons from the American pianist Sonny Taylor and undertook an intense activity as a pianist and writer in collaboration with other Italian jazz musicians. He has taken part in concerts and music productions with a variety of Italian musicians including: Paolo Fresu, Attilio Zanchi, Tino Tracanna, Paolino Dalla Porta, Roberto Ottaviano, Gigi Cifarelli, Enrico Rava, Gianluigi Trovesi, Giulio Capiozzo, Paolo Pellegatti, Tiziana Ghiglioni, Flavio Boltro, Franco D'Andrea, Gianni Coscia, Bruno de Filippi, Maurizio Giammarco, Mauro Pagani, Alberto Camerini, Franco Mussida and Franz Di Cioccio (PFM), Christian Meyer, Elio; And with international musicians including: Tony Scott, Tommy Campbell, Enzo Todesco, Pierre Favre, Billy Cobham, Martin Dietrich Whener, jeff Berlin, Grg Hutchinson. He has recorded 18 cd's as a writer for various musical groups using both acoustic and electric sounds. His initial musical experiences took place in 1971 with other young musicians from around Milano. The most interesting group that he worked with after 1979 was called "Larsen" (with Antonio Summa, Pierluigi Ferrari, Sergio Pescara e Daniela Rando). With them he examined in detail funk and soul. Then he participated in Attilio Zanchi's quartet (with Giampiero Prina and Riccardo Luppi).

Born in Modena (Italy). Oboe studies with Sergio Possidoni, Heinz Holliger, Paul Dombrecht. Experience and inspiration gained by working with Nikolaus Harnoncourt and Frans Brueggen. Philosophy Faculty at Università Bologna/ Italy. First Prizes at the International Competition of Ancona and at the Italian Television (RAI) Competition for Young Performers 1978. He owes his international reputation largely to his first recordings (among others a CD dedicated to A.Pasculli, the “Paganini of the Oboe”) which were received with great acclaim, and brought engagements at various festivals and with major orchestras in Berlin, Rotterdam, Paris, Warsaw, Lugano, Geneva, Zurich, Basel, Milan, London, Japan and the United States. Besides being a soloist, he is an enthusiastic performer varying from duo to baroque ensemble, playing on period instruments, and from wind octet (Ottetto Classico Italiano) to larger string-wind groups and contemporary music included improvisation. 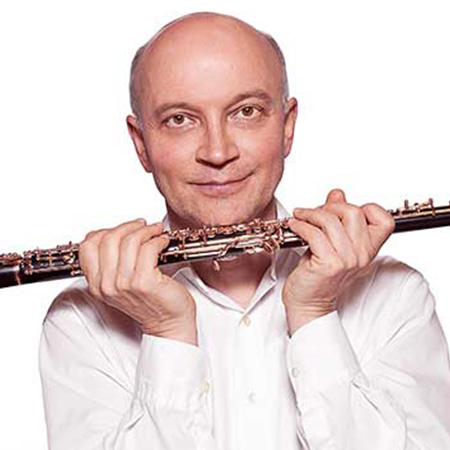 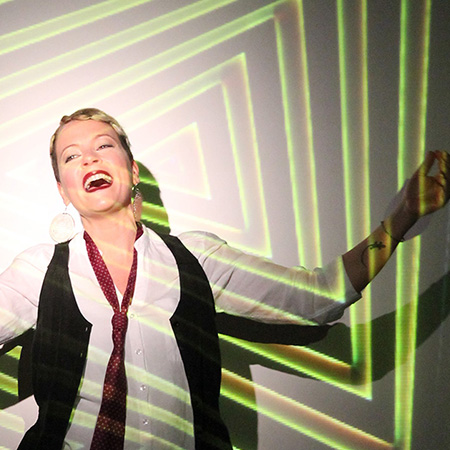 ".We are in the presence of an artist with clear ideas who wants round her people who are able to use her own language trying to make it understandable to her listeners too, offering a musical genre which is not modern just because it is timeless" From the magazine online review by Giorgio Pezzana, journalist and Biella Festival's artistic director "In the diverse world of the Italian music it is not always easy to keep peculiarities as originality and personality. For Claudia Cantisani it is not so." From "jazz meeting" column by Giancarlo Bastianelli, Tgcom24. Claudia Cantisani was born in Formia in 1981 but, just by chance, she leaves it after few years to become citizen of the world and of Lucania land. Her Education is classical and it finishes in 2009 when she took a degree in Opera at Academic of Music "G. Da Venosa" in Potenza while the study of writing was improved at C.E.T. (Toscolano European Centre) of Mogol coming to an end with a degree in 2010 (Composer Course); her vocal jazz style training is still going on at the American technique Vocal Power of Elisabeth Howard at Academic V.P. in Brescia, Italy. 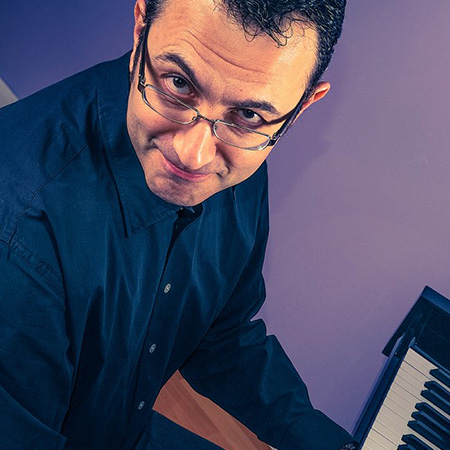 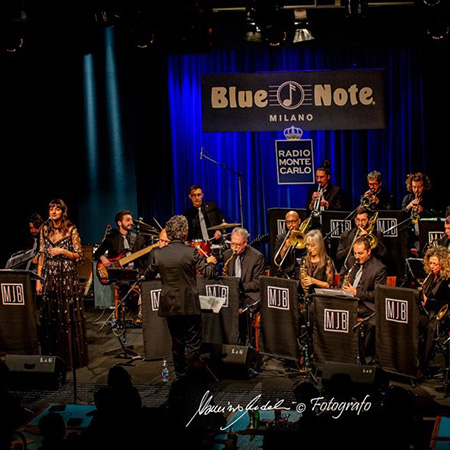 In 2006 saxophone player Felice Clemente founded “Mixiland Jazz Band”.
Over the course of its twelve year history, Clemente succeeded in creating a unique big band.
This was achieved with the support from acclaimed Italian jazz players like Marco Mariani, Andrea Baronchelli, Andrea Ferrari and Alberto Bolettieri and not forgetting the important participation of young talents from the CPM Music Institute and Milan Conservatory. The combination of chemistry between the musicians and the originality of the arrangements, captivate and impress its audiences. Mixiland Jazz Band perform in theaters and concert halls across the country, including the prestigious Blue Note Jazz Club in Milan, receiving high praise from audiences and critics alike.
Besides the aforementioned soloists, Mixiland Jazz Band collaborates with artists such as Tino Tracanna, Massimo Manzi, Marco Fior, Andrea Andreoli, Beppe Caruso and Gabriele Boggio Ferraris, who add their virtuosity to the sound of the band. With “Going Ahead” Mixiland Jazz band takes the listener back to the wonderful sounds made famous by some of the greatest big bands in history, whilst bringing it right up to date with their innovative creativity and style.